This article concentrates on whale watching in Newport Beach and other parts of Southern California!

Most of the time we have expectations about certain situations we are about to experience.  As a traveler, I constantly try to manage my expectations. But I am not going to lie.  This past weekend. I decided to go on my first whale watching trip ever.

And, let me tell you, I repeated the phrase “Please, I want to see whales” more than a thousand times.  When dealing with nature, tour agencies cannot guarantee sightings. I understand that.  But, part of my brain was adamant.  If this was a whale-watching excursion, I wanted to see whales.

“Please beautiful whales, make an appearance before me”

I do not like suspense at all.  It makes me really nervous.

Therefore,  I am going to tell you right away how this whale watching excursion went.

I expected whale watching to be cool.  However, this trip ended up blowing my mind.  I was almost moved to tears.  Here are some of the reasons why my expectations were surpassed:

We went whale watching in Newport Beach.  We choose to take a 2 hours cruise with a company called Davey’s Locker since they have a great reputation.  They depart from the Balboa Pavillion in the Balboa Peninsula.

We chose to go whale watching in December since that is when gray whales are migrating from the Arctic to Mexico.  They start their 5,000 miles journey from late September – early November.  By mid and late December, the majority of the whales are swimming along the California Coast.  They arrive at the birthing lagoon s(in Mexico) in January.

Once on board, the captain told us to sit down and relax for 45 minutes because he was going to search for whales at about four miles from the coast.  Three minutes after he said that he announced through the speakers: “We got them”.  We spotted a whale less than 2 miles from the coast.

I lost count of how many whales we saw.  I think the final number is 8 to 10.  The funny thing is that even though we were in the middle of the gray whale migration, we didn’t see this type of cetacean.  We ended up bumping into an area full of fin whales (which was nicer since they are bigger than gray whales).  Even the captain said he didn’t understand why there were so many around.

There were tons of dolphins playing around the boat. If you are not aware, in Southern California we have more than 400,000 common dolphins living off the coast.  They usually hang around in pods of about 200 individuals.  Superpods of 1,000 dolphins or more have been spotted.  Bottlenose and Risso’s dolphins can also be observed on excursions.

In my opinion, the best part of the trip was seeing the fin whales and the dolphins swimming and playing together.  This was awesome!!! The captain was able to spot some of the whale locations by observing the dolphins’ behavior.

Take a look at the following video where I was able to catch a fin whale and dolphin swimming together (try to see if you can determine who is who). 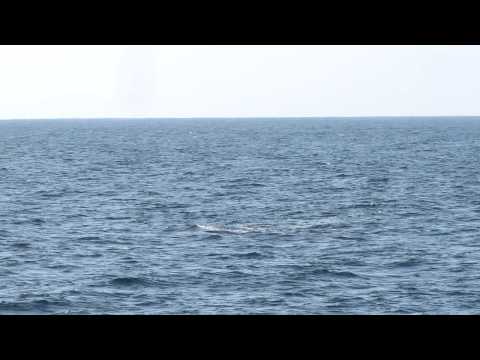 Here is another video of a fin whale final surfacing before taking a deep dive (they can be underwater for up to 20 minutes!!!).  Be patient with the video and wait till the 10th second for the action to start. 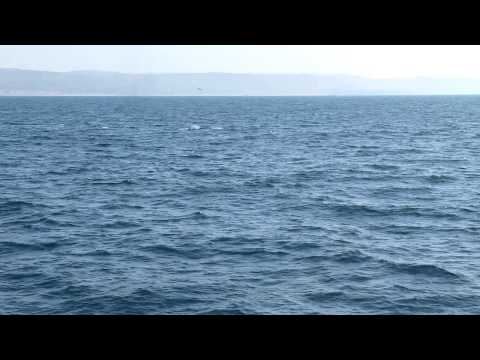 Another cool thing about Davey’s Locker is that each whale excursion has naturalists, marine biologists, or cetacean experts onboard. They really gave us a lot of information about the whales and other sea creatures.

I think this is an intelligent move because all this information really helps you appreciate this natural spectacle (and makes you understand why it is important to protect the whales).  We are talking about the longest mammal migration on the planet. Here are some interesting facts I learned:

Most types of whales were hunted almost to extinction.  The gray whale migration is at a healthy point today because Canada, Mexico, and the United States protect these animals and their habitats.

Some whales are so fast that it was almost impossible to hunt them before the invention of the mechanized harpoon.

Gray whale food sources are located in Alaska.  Whales can lose up to one-third of their weight during the migration.

I do not want to be explicit but the matting process is kind of complicated.  If you weight 60,000 pounds, well, things are not that easy.  There are cases where a third whale provides helps by pushing one of the whale matting into another (sorry for the mental scene).

Young males go to Mexico to see if they can mate.  Usually, older males get all the ladies.

Dolphins are whales too.

Gray whales will return north at the end of March and the beginning of April (good time to go on a watching trip).

Blue whales (the largest animal on earth) migrate during summer.  It is possible to go on a similar trip in July and August (I didn’t know that).

There is an opportunity to see at least 4 types of whales in the area (grey, blue, humpback, finback).  Of course, there are observed during different times of the years.  Orcas are seen sometimes.

Wow, I just loved this trip.  I urge you to have a similar experience.  You have to see all the grown-up jumping and giggling like little kids when a whale was in sight.  Even the Grinch wouldn’t resist something like this.

If you are interested in going on a whale-watching excursion, cruises operate from the following cities:

Ventura – Cruises are offered by Island Packers, the same company in charge of transporting people to the Channel Islands National Park.  They offer a wildlife cruise around Anacapa Island and birding excursion.

Things to Do in Ventura

Redondo Beach – You can take an excursion with Redondo Beach Sportfishing (departs from the Redondo Beach Pier area).  The plus of taking a cruise from Redondo is that you will get magnificent views of the Palos Verdes Peninsula.  The boat captain will search for whale along the peninsula.

Things to Do in San Pedro

Long Beach – Harbor Breeze Cruises has been operating for over 20 years and offer a variety of tours (whale watching, harbor, fireworks)

San Diego – You can take an excursion from Mission Bay, Harbor, or the Embarcadero.

Whales can be observed from land too.  Here is a list of high places that are ideal to spot whales.  If you see a link, it means I have written an article about the specific place.  Click to learn more.

There are several important things to take into consideration when deciding to embark on a whale-watching trip.

As you can see from the article, several companies in Southern California offer whale watching trips.  Therefore, there is competition and prices are kept reasonable.  Before paying full price at excursions, look for offers and deals.  Sites like Groupon and Travelzoo offer discounts.  Now, make sure you read well what is included.  One company may offer a cheaper price than another because time on the water is shorter.

Pay attention to additional fees you may have to pay once you are at the port.  Some companies charge up to $8 in fees per ticket (fees may be related to port charges or surcharges imposed by the company).

I recommend going on an excursion that has a marine biologist onboard.  These experts make all the difference.  They will explain aspects related to migration, behavior, diet, etc.

Come prepared with a jacket or windbreaker.

Wind can get quite strong.  Be careful with hats, caps, and sunglasses.

Cruises have a cafeteria on board where you can get hot drinks, snacks, and simple fare.

After my initial experience of whale watching in Newport Beach, I have become kind of a whale freak. I am into all things related to whales (including being part of conservation non-profit organizations).

I have been to the Ojo de Liebre or Scammon’s Lagoon in Guerrero Negro, Mexico.  If you want to read about my experience, in one of the grey whale birthing lagoons, you can click on the article shown below.

I want to go whale watching again tomorrow.  Who’s with me?  Not really, I think I am going on another trip to see if I can spot some gray whales.  Definitely, I will go back in summer for the blue whales.

Have you done a whale watching trip in Southern California? Let me know in the comments section below.